Get It Together, Delilah! 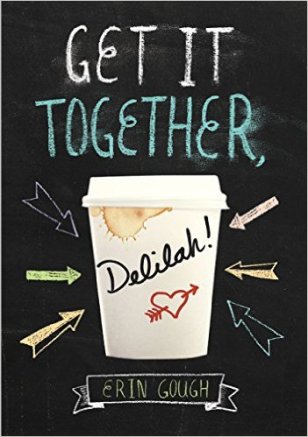 Get It Together, Delilah! by Erin Gough is a quick, easy read full of reminders of what it means to be a friend in times of need.

Delilah, an Australian import, will certainly delight most of my YA patrons. In a time where I’m finding most books to be too heavy or inappropriate for some of our younger YA readers, I know I can confidently do a RA (reader’s advisory) where I recommend this to them.

Delilah is a teen who gets stuck running her father’s diner, the Flywheel, while he gallivants across the globe. Since she’s a teen, this is realistically not possible. She even has to fire someone for stealing from the cash drawer. This is not going well, and Delilah can’t possibly fix the financial problems of the Flywheel while being a student.

Well, Delilah solves that problem by deciding not to go to school anymore. After the Mean Girls of the novel share an embarrassing video of Delilah dancing in the privacy of her own establishment, she is subjected to ridicule. To make matters worse, the bullies constantly make remarks about her sexuality, calling her a “lezzo” and a stalker.

I want Delilah to be a role model to young LGBT kids. She is hurt, of course, but she rises above what happened when her first semi-girlfriend turned on her and denied their relationship. Delilah faces the cruel torture of students using words to describe homosexuals as if they are insults. Ah, remember the good ol’ days of middle school and high school? Barf. Apparently, kids still think it’s ok to use the term “gay” and “lesbian” as a synonym for “stupid,” “gross,” and “loser.” Not that Delilah should even be called those things either! She tries to regain her confidence and heal her soul by throwing herself into the business and out of school.

The book is really written like a true first-person, I’m-in-her-head type of book. Texts moves back and forth from present to flashback as we get lost in Delilah’s mind with her. She has sarcastic quips and a biting sense of humor. She’s real and she’s relatable. We are never under the impression that she is perfect, but she certainly tries her best to go forward each day. This is why I want her to be a role model. She’s not an impossible being that teens try to be – she is possible.

But poor Delilah, really. Stress builds up as her former, cash-pilfering employee tries to sabotage the restaurant in every way possible. Her best friend assaults someone and wants her to lie about it in court. Her other best friend is trying to force her to go back to school and might be keeping a secret from her. The girl she has a crush on comes from a family that only approves of relationships of a man and women from the same culture and religion. Everything is falling apart, and Delilah loses her cool. Will she ever be able to keep the Flywheel open and fix her friendships?

Get It Together, Delilah! is a book about doing what is right and helping friends in need. Sometimes she helps friends, and sometimes they help her. Despite their tiffs, they know the true value of lasting friendship. I don’t think we see this often enough in YA problem novels. I’ve read a lot of heavy stuff this past year, and I’m happy to see a book such as this remind us and readers about the simple need to be kind and supportive to friends and your community. Support local businesses! Save the library! Fall in love (but don’t forget that you’re just a teenager and it’s ok to take it slow)! And don’t forget to enjoy the milkshakes!

Look for the book to drop April 4, 2017. Thanks to NetGalley for the ARC and the chance to read and review this satisfying read.