The beginning of Cloud Atlas starts off slow, but its compelling format turns the reader into a little brother peaking at his older 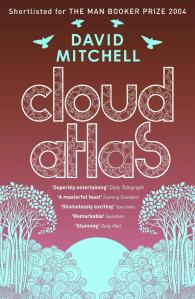 sister’s diary. What can be more compelling than that?

This novel is a brilliant work of epistolary fiction composed of 6 interweaving stories throughout 6 different time periods, told by 6 different characters. It is clear from the text that Mitchell has the ability to switch perspectives, and write in any voice he chooses to, which is a feat that deserves recognition. Mitchell takes on the voice of Adam Ewing, a notary writing his diary in the mid-1800s, letters from the musician Robert Frobisher to his friend and former lover Rufus Sixsmith, a novel manuscript given to a publishing company about the thrilling adventures of Luisa Rey, a journalist in the 1970s, an account of the comical horrors that Timothy Cavendish, a vanity publisher must go through in modern day, a interview of a human clone named Somni~451 living in a highly technological future, and the story of Zachry told to us in a post-apocalyptic world in Hawaii.

The format of Cloud Atlas can be compared to a camera lens that zooms in at an object, then back out again. The book is broken up into 11 parts, though there are only 6 stories. Each story, with the exception of Zachry’s, is cut off at a climax and then proceeds to the next story. Zachry’s story “Sloosha’s Crossin’ an’ Ev’rythin’ After” is the heart of the novel, the culmination of the work of the previous stories. This is the “zoom in” function of the camera. Then in reverse order, the novel “zooms out” creating a mirror image of the first half of the book, continuing each of the stories. While not necessary, the very format of the novel emphasizes the connections between the characters.

While others may see the connections between each of the stories as weak, they are significant. Reincarnation is a theme that follows the reader throughout the novel, reminding us that we are all connected. This is, I believe, the heart of Mitchell’s novel. Cloud Atlas carefully explores the relations between 6 different lives, illustrating that we are not just individuals who can live as though what we do will not have an impact on later generations. Ewing’s diary is found by Frobisher as he is writing his music, which Luisa Rey is familiar with, whose story is published by Timothy Cavendish, whose adventures are filmed and viewed by Somno~451, whose manifesto of life is worshiped by Zachry and his people as the words of a deity. There isn’t a single thing that one person can do that will not effect the life of another.

Through the twists and turns of plot, this novel reveals the importance of human relationships. From this, responsibility plays a part; a responsibility for mankind. While not obvious at the start of the novel, Luisa Rey, Somni~451, Zazhry, and at the very end of the novel, Adam Ewing all realize that they must take action, and that they have responsibility, not only to the world, but to themselves. It is Ewing’s  last entry his diary that perfectly sums up the importance of responsibility and the impact of taking it on. Cloud Atlas is a masterpiece of contemporary fiction that appeals to all and applies to all.