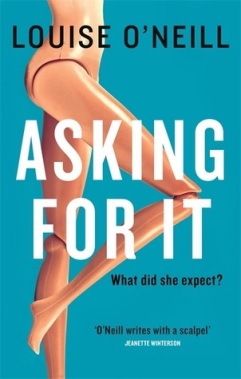 You know what’s something we still need to talk about?

We do. We, as a nation, are a tragic embarrassment when it comes to these two things (among others…). If you don’t think this is true, can I remind you of Brock Turner? Can I remind you of all of the women who have heard snide, sexist remarks followed by “We can say these things in Trump’s America”? I have heard more than one person that I personally know say that they have actually had this said to them.

And we need not mention that we now have a president who thinks that he can say and do whatever he wants to women and that consent isn’t even a notion to think about.

I don’t care if a woman is model beautiful, I don’t care if she isn’t, I don’t care what she looks like, acts like, or what her sexual history or is not. If she says no, that means no. If she doesn’t actually give consent, that’s still a solid no, pal.

This is the tough conversation that we’re tackling when we read Asking For It by Louise O’Neill. And when I say “we,” I mean that you should read it.

Emma is a girl who knows that she’s beautiful and isn’t afraid to flaunt it. She knows what she wants and she knows who she wants. To be quite honest, she’s kind of a bitch. She’s all about her image. She’s not a really good friend. She drinks a lot, dresses extremely provocatively, and at a wild party one night, she makes the first move on the guy. However, she realizes that she is not in control due to drugs and alcohol, and she realizes that she’s not comfortable with the situation. She can’t quite say no, but she never says yes to him. In return, he makes derogatory comments to her, hurts her, and keeps going. She doesn’t know what to do, so she plays along. Before she knows it, she’s taking more drugs, and more people are there with them.

The next morning, Emma is found by her parents dumped by their front door. She has no idea what happened to her the night before, but she knows that her body is physically hurting.

What follows Emma next is a series of events that are hard to ignore as familiar. Her friends hate her and ignore her, even though she doesn’t know why. Her brother hates her. Everyone hates her. And soon she finds out why. Someone has created a defamatory Facebook page filled with disturbed images of what is a gang rape. The young men involved took pictures of everything they did to her, of her body passed out, and treated themselves like heroes for giving her “what she deserved.” In her shame, she tells the adults in her world that she was in on it – that she was just pretending to be asleep. She has been shamed into silence, thinking that maybe she did deserve it.

Does this sound uncomfortably familiar yet?

She ends up leaving school. She has to see a therapist. She comes clean about that night and wants to press charges. People send her terrible messages, telling her that she was a slut who was asking for it, that she should have been better at her suicide attempts, and that she can never win against her accused rapists from the football team. They’re clean cut jocks and she’s a girl who drank and dressed in a manner not befitting a nun. To the world, she’s at fault.

The supporters of the boys wear #Team shirts with the names of the boys. The town priest stands up for them. Emma’s thinking more and more of how badly she was hurt and how close she had been to ending her life.

When someone drinks or dresses in a certain way, they are aren’t doing so to get someone to forcibly attempt sexual contact. The only time that is appropriate is when the person says “This is what I want.”

All over the country, we see consent not being identified as a learning point, or as a subject to be spoken about. Campuses give girls “tips” on how to prevent rape, as if the victim is at fault, and as if the victim can prevent it from happening Further, people shame the women into silence, calling them liars, asking why they didn’t come forward sooner. Maybe it’s because the public is being one giant massive prick about the whole situation. It’s shame, it’s bullying, and it’s taking away the quality of a person’s life. Who know who is responsible, who could prevent rape from happening? The rapist. The man or woman who decides to physically hurt someone in a most personal way in some strange attempt to assume power and control.

I can’t say that life ever goes back to normal for Emma, but I can say that she works to regain her sense of self, and her strength. O’Neill chose a very realistic ending that may not fulfill some readers. For readers who are aware of the very real situation O’Neill writes about, the ending is exactly right.

Speak up. Treat others right. Remember consent. Remember to support those around you who are in pain. And always remember to fight. Read this book and remember why this is a conversation worth having, and a cause we need to fight for next time we see another person get let off easy for ruining another person’s life.